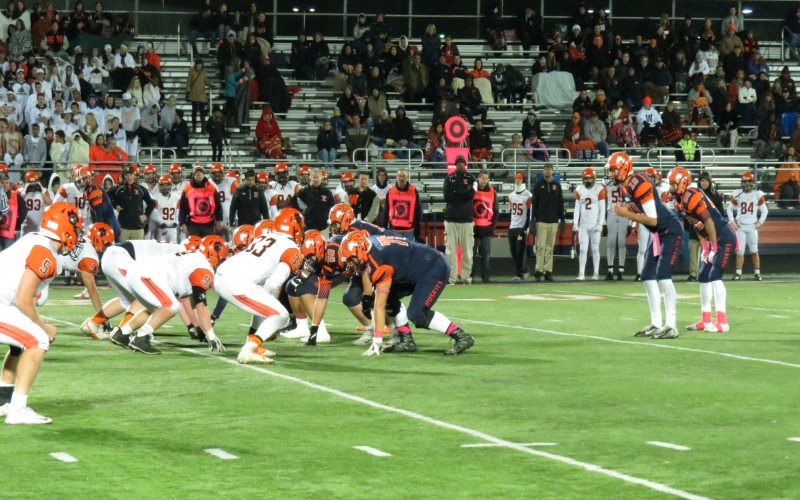 The Huskies clinched the 14th seed in the 8A playoffs after winning their last regular season game 28-17 against Wheaton Warrenville South.

It’s safe to say the Huskies have had an impressive regular season. They got the ball rolling right away with Eric Wright rushing 35 yards for a touchdown on the opening drive of their regular season as the Huskies defeated the Sandburg Eagles 42-14. This offensive explosion set the tone for the rest of the regular season.

The hype continued at the Huskies first home game against DVC rival Metea Valley. The game was back and forth all night until it came down to a potential game-winning field goal by Matt Malan. Malan missed wide right sending the game to overtime. The Mustangs scored a touchdown on their possession and the Huskies answered right back with their own score by Mitch Lewis, and a game-winning two-point conversion catch by Nick Calcagno. North went on to win their next three games.

Heading into their highly anticipated matchup versus Neuqua, both teams entered undefeated. In the Chicago Tribune Preps game of the week, the Wildcats overpowered the Huskies on both sides of the ball and handed North their first and only loss of the season 35-20. As we would later find out, these two teams ended up being co-DVC champions.

North did not let this loss discourage them or slow their momentum in any way. They bounced right back putting up 50 points against crosstown rival Naperville Central. After this big statement win, the team capped off their regular season with wins against Waubonsie Valley and Wheaton Warrenville South.

This season, the Huskies had a lot of experience to rely on. The team had many returning players from last year, most notably seniors QB Luke Cegles, RB Eric Wright, and WR Matt Montgomery. Junior wide receivers such as Nick Calcagno and Ryan Laurenzo stepped up big time this year playing a very important role in the Huskies explosive offense.

During the offseason, the Huskies gained another huge asset to their team with the addition of offensive coordinator Mike Fitzgerald. Fitzgerald’s experience and recent success provided an entirely new vibe that translated very well onto the field.

With lots of recognition for the offense, the Huskies defense deserves credit in their own right. The defensive line was stacked with seniors such as Alex Iaccino and Malik Wells, and the  secondary was commanded by Grant Erickson and Cam Hardy. Erickson led the team in interceptions this season with 7 and cornerback Ryan Marrano led in sacks with 4.00 on the year.

The team also had no shortage of motivation. After two straight disappointing 2-7 seasons, the Huskies did not want another season anywhere close to that. They came out this season firing on all cylinders and made sure this year was one to be remembered.

#1 Loyola Academy (9-0, 4-0) – The defending 8A champions are poised to strike again, entering the playoffs as the number one overall seed. The Ramblers have scored 35 or more points in every game this season, thanks in part to a star-studded offense. Dual-threat quarterback Tommy Herion has a very talented team around him, including the 7th-ranked player in the Illinois class of 2017, according to rivals.com, tight end Jake Marwede. Marwede received offers from the top programs in the country, including Alabama, Georgia, and Ohio State, but committed to Duke. Beside him is talented wide receiver David Terrell and on the offensive line is Colgate commit Jack Badovinac. One thing that separates Loyola from other teams is their talented on the defensive side of the ball. Lead by linebackers Anthony Romano and Hayden Olds, the Ramblers held five teams to under ten points. The secondary is anchored by Connecticut recruit and cornerback Ian Swenson. Loyola is favored to repeat as champs, but first, they must take care of #32 O’Fallon at home.

#2 Hinsdale Central (9-0, 6-0) – The Red Devils of Hinsdale went undefeated and won the West Suburban Conference for the first time since 2004. Quarterback Josh Bean, a Columbia commit, has benefitted from one of the best offensive lines in the state. Led by Princeton recruit Niko Ivanisevic and guard Brian Foley, who has received multiple FCS offers, the offensive line has allowed coach Dan Hartman to run the offense efficiently. A potential weakness for the Devils would be up front and in the linebacking corps. It remains to be seen whether or not linebacker and Ball State commit Dorion Pollard will play in the playoffs. Their first matchup is at home against #31 Waubonsie Valley.

#3 Palatine (9-0, 5-0) – The Mid-Suburban League champions enter the playoffs undefeated and have faced tough opponents, despite their conference schedule. Non-conference victories over #9 Stevenson and #22 New Trier, along with a conference win against 8-1 Barrington, give Palatine experience against some of the better teams in the state. On offense, Palatine is led by dual-threat quarterback Zach Oles, who has offers from Butler, Jacksonville and Valparaiso. Defensively, the Pirates have only allowed more than 21 points once, giving up 31 to Barrington. Palatine’s first game is at home against #30 Notre Dame.

#4 Homewood-Flossmoor (9-0, 7-0) – The Southwest Suburban Conference champions have dominated this season, outscoring opponents 386 to 94. The Vikings are led by dual-threat quarterback Bryant Wright, who has great talent all around him. There are three Mid-American Conference (MAC) commits on the offensive side of the ball. Wright has great protection from guard John Michael Schmitz, who has committed to Western Michigan, as well as guard and Central Michigan recruit Jamezz Kimbrough. The talented playmakers on offense include wide receiver Tyrice Richie, a Northern Illinois commit, and junior running back Justin Hall, who has offers from Iowa State and Central Michigan. All the offensive talent overshadows a defense that has held six opponents to ten points or fewer. HF hosts #29 Evanston Township in round one.

#8 Brother Rice (8-1, 3-1) – The only one loss favorite on this list, Brother Rice enters the 8A playoffs coming off a 48-37 loss to Loyola Academy. Still, the 8-1 Crusaders have the offensive firepower and solid defense to play with the best. Running back Xazavian Valladay, a Wyoming commit, and wide receiver Ricky Smallings, lead an offense that has 31 points or more in every game. Smallings is ranked the 6th best player from the Illinois class of 2017, according to rivals.com, and is committed to Illinois. On defense, Brother Rice is lead up front by defensive tackle Larry Washington. The defense proved itself in the season opener, beating Marist 31-7 at Soldier Field, showing they are not afraid of the big lights. Unfortunately for Brother Rice, they would most likely have to meet Loyola in their second round game. But first, Brother Rice has to take care of business at home against #25 Fremd.

#13 Neuqua Valley (8-1, 7-1) – The Wildcats lost the chance to have their second undefeated regular season in school history after their 35-14 loss to Glenbard North. Still, they have an impressive resume and are the co-champions of the DVC. They also gave Naperville North their only loss this season, 35-20. For Neuqua, they are a team built around athletes. Notre Dame recruit Isaiah Robertson and Navy commit Owen Piche play on both sides of the ball. While Neuqua has a strong front seven led by linebackers Jon Rhattigan and Anthony Ippolito, Glenbard North exposed the lacking secondary. Glenbard North wide receiver Jace James had 201 receiving yards and two touchdowns last week. Neuqua Valley’s first playoff game is at home versus #20 Glenbard West.

#31 Waubonsie Valley (5-4, 4-4) – In a winner-take-all game of 4-4 teams, Waubonsie Valley grabbed a playoff spot with Cross Holmes’ game-winning field goal last week against Wheaton North. Waubonsie has had an up and down season with a win over Glenbard North but losses to Naperville Central and Wheaton-Warrenville South. On offense, quarterback Tanner Westwood and running back Nate Ashford lead the way for the Warriors. But, the most important player without a doubt is playmaking tight end and safety Chuck Robinson. The Warriors are no stranger to being an underdog after being the 30th seed last year and advancing all the way to the semifinals. They’ll try to match last year’s playoff magic again on the road against #2 Hinsdale Central.

#15 (7A) Glenbard North (7-2, 6-2) – After handing Neuqua their first loss, the Panthers look to continue their success into the 7A playoffs. They will be led by running back Vittorio Tricase and wide receiver and Northwestern recruit Jace James. Tricase has over 30 touchdowns on the year and James had a 201-yard, two touchdown performance against Neuqua Valley. The Panthers only losses were against Waubonsie Valley and Naperville North. Even so, Glenbard North received the 15th seed in the 7A bracket, somewhat low considering their strength of schedule and win over Neuqua Valley. They play host to #18 Pekin for their opening 7A playoff game.

The Huskies are presented with the task of facing Ben Bryant, one of the top quarterbacks in the state, who is the star of Lyons Township as he has offers from Wisconsin-Madison and Central Michigan. To stop him, the Huskies need to control the clock to help out their defense. The offense can do so by using senior running backs Eric Wright and Cross Robinson. Both backs have over 800 yards rushing and a combined 17 rushing touchdowns. Naperville North has to play their own game in order to win and avoid an offensive shootout.  On offense, the Huskies have to take care of the ball and can’t allow themselves to force a pass. The defense must force turnovers but also force Lyons’s quarterback out of rhythm early.  The Huskies can put pressure on Bryant by causing turnovers. Interceptions will play huge a role in the game as Grant Erickson had 7 INTs this season and makes quarterbacks pay for bad throws. Naperville North also has to win on special teams. While Cam Hardy has been reliable all year in the return game, the Huskies need their punting and kicking units to step up.

If Naperville North defeats Lyons Township they will more than likely be playing the #3 seeded Palatine Pirates (9-0, 5-0).They average 39.1 ppg and allow 16.33 points per game. Led by dual-threat quarterback Zach Oles and a platoon of running backs consisting of Josh Turner and Courtland Cornelius, the Pirates went undefeated. They have a well-rounded defense allowing 16.3 points per game on the season but are sometimes susceptible to allowing the big play. The way that Naperville North can win is by chewing the clock, which is what Wheaton-Warrenville South did against the Huskies. Even though the Tigers lost, they kept the game close up until the fourth quarter. Overall, it will be an intriguing matchup but the only way to win is by controlling the clock, Luke Cegles throwing efficiently, mixing up the play-calling, and making great special team plays. 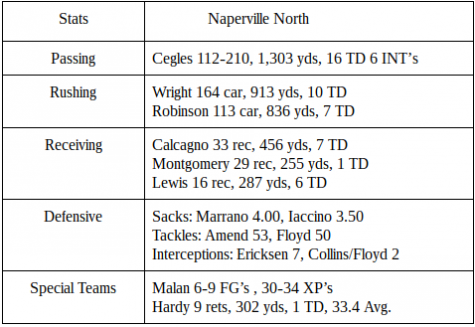