Behind the Film: Costumes 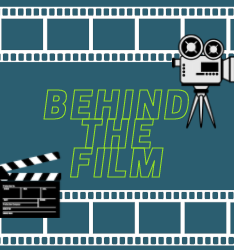 Films are beautifully complex. A multitude of elements woven together to create a clear, unified message. However, some of these production elements are rarely recognized or understood. From costumes to music, let’s go behind the film.

In the last edition of the year we’re diving into the art of costume design. Costume designers utilize various colors, shapes and lines to define a character’s personality and style. Clothing is inherently character, but how is it used to enhance a film?

Color is one of the simplest ways to establish a character. In one way, color can be used to represent the morality of a character’s actions and guide the audience through their feelings towards the character. One of Netflix’s newest shows, “Anatomy of a Scandal,” showcases this in its very first episode. Esteemed government official James Whitehouse’s affair is finally revealed to the public and his wife, Sophie. James is wearing dark, layered clothing while Sophie wears lighter and brighter colors that display their roles in the scandal: guilt and innocence. This helps to establish the power and place dynamic between the two characters that runs throughout the show.

Another common use of color is to show a stark change in a character’s personality or circumstances. For instance, it can be used to showcase the evolution of a character after the death of a loved one, such as in the CW show, “Jane the Virgin.” Jane wears a variety of bright, multicolored clothing throughout the series to represent her bright, excited personality and optimistic outlook on life. When her husband suddenly passes away, Jane’s clothing immediately shifts to darker, more neutral colors. The death deeply affected Jane as she lost her support system and friend, an emotional turmoil that was reflected in her change in clothing. Her change in clothing color made it exceedingly clear to the audience the true depth of her loss.

Shifting gears, the shapes and lines created in a costume can also be used to establish a character. Lines are the silhouette or overall shadow of a costume and can fall anywhere between sharp or soft. The movie “Cruella” utilizes lines to establish a clear difference between characters. The Baroness, just like her demeanor, is stiff with very sharp and clear lines in her wardrobe whereas Estella (Cruella) showcases a mix of sharp & soft and unclear lines that mirror her everchanging, optimistic outlook on life. The two characters are constantly at odds with one another and their clothing represents this present power and personality dynamic.

Similar to lines, shapes define the overall look of clothing and can be used to show the contrast between characters. “The Crown” employs the shapes of dresses to portray the distinct contrast between Queen Elizabeth II and First Lady Jackie Kennedy during the meeting of the pair in the 1960s. Elizabeth wears an A-line dress with ruffles and beaded lace detailing that mirrors the style of the 50s, while Jackie wears a tight, smoother dress reflecting more modern trends. The show addresses Elizabeth’s reputation of being stuck in the past and unaccepting of the changing world while Jackie is the epitome of change. The contrasting dresses emphasize the conflict and differences between the two characters’ reactions to a changing society: one embraces while the other rejects.

Costumes help define a character and characters define a film. Whether it represents a character’s actions, personality or displays disparities between two characters, it is an integral part of creating a complete person in an often fictional setting.