Spoiler-free review: Marvel’s Eternals is a breath of fresh air 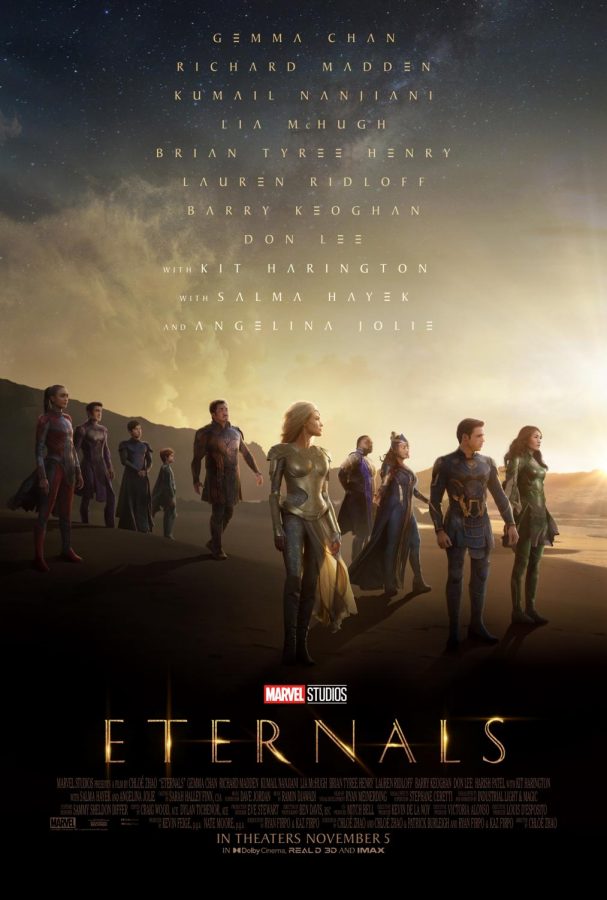 Marvel’s Eternals, one of the most anticipated movies of the year, is finally here. Featuring a whole new cast of characters, the movie follows the Eternals. The Eternals are a race of ancient aliens who lived on Earth for many years, and now they are finally emerging from hiding to unite against a common foe. With a staggering main cast of ten new heroes for the Marvel Cinematic Universe (MCU), this film is definitely worth its two and a half hour length.

On Rotten Tomatoes, the movie received an 80% positive rating for its audience score and a 47% on the Tomatometer, meaning that critics dished out an unfairly rotten review for a movie that most certainly did not deserve it. Amongst the lineup of its brother and sister MCU films, director Chloe Zhao’s Eternals is a stand-out must-see. Featuring a main cast with Southeast Asian, Latinx and Black actors and actresses, this otherworldly team paints a contrastingly diverse picture against the majority white backdrop that the MCU established in previous movies.

Going off of past history with MCU’s superhero group movies (Guardians of the Galaxy, Avengers, etc.), Eternals is likely the first installment in what will shape out to be a groundbreaking trilogy. Keeping that in mind, the film is heavy on primary introductions and relies on flashbacks as a way to show, not tell the audience important context that is needed to understand the ongoing conflict. Of course, although heavy handed, these flashbacks are offset by the fact that they take place during crucial moments throughout mankind’s early history. Audience members are visually fed with renderings of grand architectural structures (like the Ishtar Gates in Mesopotamia). Kudos to the visual effects team– clearly, they were taking many hours of overtime work, and it paid off beautifully.

Speaking of first introductions, let’s take a look at what the cast of Eternals has to offer. Undoubtedly, while visual effects and stunning fight choreography played a critical role in the film’s success, it is unanimous that the cast’s performance carried Eternals through to the end. Actor Barry Keoghan and actress Lauren Ridley are two remarkable cast members who, in the span of under ten minutes of screen time, effortlessly steal audience members’ hearts. Reactions of fans across social media platforms such as Twitter and Tiktok are here to back us up on this. Quality over quantity is the perfect phrase to describe this cast’s performance, and when you’re juggling a lineup of ten different characters sharing the spotlight, that is definitely the way to go.

Additionally, one should note that Eternals is the first film in MCU’s Phase Four lineup that does not feature any actors or characters from previous films. This fact contributes to the film’s overall success of standing apart from previous MCU films. We believe that it also makes the film remarkably refreshing. After all, it’s been a hot minute since the MCU dished out anything that didn’t ride off of the waves of nostalgia by tossing in an “oldie but goodie” character and hoping for the best.

With a plot twist in the film’s final protagonist that manages to catch the audience off-guard, Eternals dishes out a final battle that seamlessly intertwines two of the film’s subplots into the main story line. Despite the main conflict (aka the end-of-the-world) finding a rather satisfactory conclusion, Eternals still manages to conclude with an open ending. With the group split up once more – similarly to the beginning of the film – the Eternals’ found family comes full circle.

And yes, the rumors are true. Stick around for the mid- and post-credits scenes, and beloved pop star and British icon Harry Styles makes his MCU debut. Styles fans, don’t get too excited – the singer’s potential in the MCU will undoubtedly be explored in future films, and his one-minute cameo shouldn’t overshadow the main cast’s performances.

This first iteration of Eternals leaves the audience caught off-guard (not in a bad way!) – and understandably, with a yearning to see where the heroes will go from here. Despite being promoted to embody the cliche “found family” trope, Eternals is still an entirely fresh take on this. The film takes time to explore what happens when families break apart and find their way back together in the aftermath.

Ultimately, Eternals is new in all of the best ways. It isn’t often these days that the MCU puts out a film that is completely unlike anything that has been seen before. The Marvel Cinematic Universe is entering a new era, and Eternals sets itself up to be one of the front-runners.