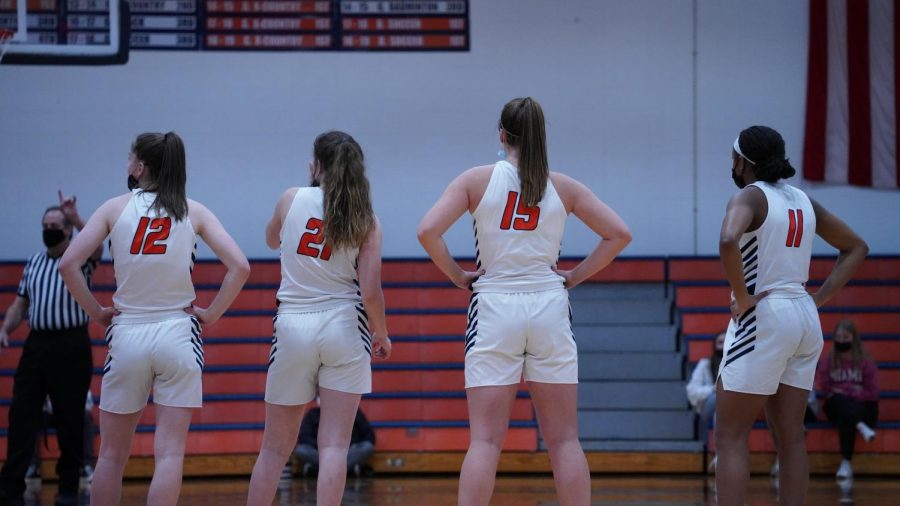 The Huskie offense came out strong, racking up a solid lead. However, after an injury for the vikings and a few questionable calls by the referees, the Vikings closed the score gap to 8 points.

Naperville North expected a tough game against a well-rounded Geneva. Geneva, a strong team outside the paint, used their range to close the score throughout the game. Senior captain Sarah Crossett felt that the team focused primarily on what the Huskies do best.

“It just came down to focusing on our game and how we run best⎼pushing the ball in transition and getting [the ball] up quick,” Crossett said.

Head Coach Erin Colletti was happy with her team’s performance, but is looking to improve on the team’s offensive skills and staying on top of the ball more consistently.

“Rebounding was terrible. There were moments when we had a great rebound, but there were multiple plays where we had second, third, and fourth opportunities,” Colletti said.

Junior Abby Drendel felt that the team’s preparation since their last game was one of the main reasons for their success.

“We watched our film a lot and figured out what we needed to work on,” Drendel said.

The Huskies will continue their season on Dec. 2 against the Neuqua Valley Wildcats at Neuqua. The game is scheduled to tip-off at 7 p.m.