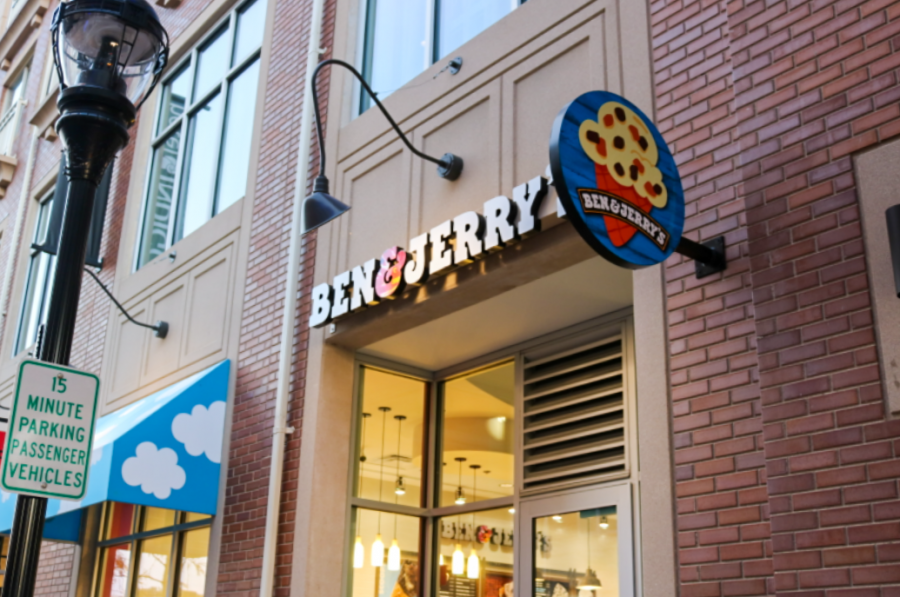 Downtown Naperville’s newest ice cream addition, Ben & Jerry’s, has swept the community ever since it opened in August. Many days, customers are packed shoulder to shoulder to get a taste of the store’s ice cream.

The store’s popularity begs two big questions: what’s the secret to Ben & Jerry’s success? And how might their customer flow be affecting other local ice cream businesses?

“There’s [a level of] super-premium ice cream in Naperville. That means there’s less air in the ice cream and higher butter-fat content,” O’Toole said. “I think we’re one of the only super-premium [ice cream stores].”

Along with the heightened quality of ice cream, O’Toole mentioned that Ben & Jerry’s makes a point to prioritize their involvement in the Naperville community.

“We’ve done a lot of events in the community, everything from the Long Table Charity Dinner on Water Street to benefit the food pantry to the Rotary Hill and Naperville Neighbors United; we did the KidsMatter Gala, we donated an ice cream sundae package here that went for a thousand dollars. Just being involved means a lot to us,” O’Toole said.

O’Toole credits the success of Ben & Jerry’s over the past month to all of these values and standards. Despite just missing the summer rush of ice cream mania, the business continues to boom in Naperville. Can the same be said for other ice cream businesses downtown?

Cookie Dough Creations, a charming cookie dough and ice cream shop, has been a staple in downtown Naperville since its opening in 1994.  While selling ice cream, Cookie Dough Creations is the only store in downtown Naperville that also sells edible cookie dough. This signature trademark has arguably been one of the main factors in the business’s long-established reputation.

“When I heard Ben & Jerry’s was coming Downtown, I was a little concerned. In all fairness to them, they came at the end of summer, so they didn’t really get the benefit of the summer traffic. So, it’ll be early spring or next summer, I think, is when we’ll really be able to kind of gauge what the effect [of Ben & Jerry’s] is,” Schultz said.

“Being here for so long, I get people that come here with their kids and say that their parents brought them here when they were kids. So, that’s one thing that is a positive, you know, for us, is the longevity,” Schultz said. “Thankfully, we have a pretty long history in Naperville, specifically downtown.”

It’s hard to get an exact gauge of Cookie Dough Creation’s competition in October. As for now, the business will have to play the waiting game until next summer rolls around.

Ben & Jerry’s newfound popularity does not seem to be affecting every ice cream business in Downtown Naperville, though. Business at Kilwins has been virtually unaffected, as the often-busy shop continues to have lines stretching out the door.

At the end of the day, the ice cream business does not rely on utter perfection or reputation, nor do certain stores strike the jackpot by chance. Gabbi Pompilio, the assistant manager at Kilwins, believes that each business has its own claim to fame– a specialty that makes their ice cream, well, special.

“I definitely think that there’s room for everyone, and I feel like every shop has their own little unique thing that makes customers drawn to them,” Pompilio said.