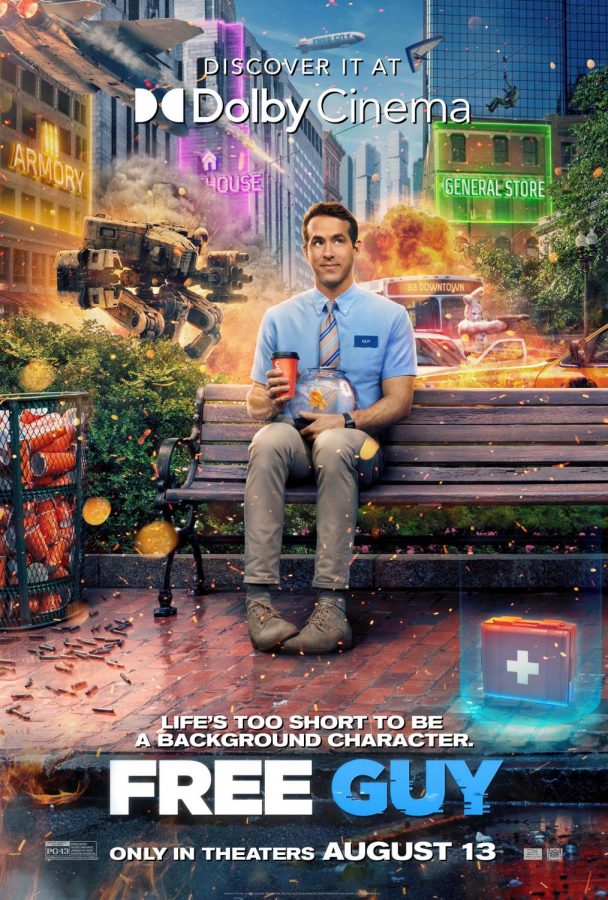 A few weeks back, my good friend, brother and I took to Rosemont to attend a small convention and decided to roam the surrounding city. As we wandered the mix of Tex-Mex restaurants and fashion outlets, we stopped at the local AMC. After browsing the bland catalog, we settled on Free Guy. The trailers and cringey advertisements left me with an expectation of a less than mediocre but moderately entertaining flop, but honestly, I’m glad we stopped by. Free Guy was far more fun and interesting than I would have ever thought.

Directed by Shawn Levy, the movie features many familiar faces such as Ryan Reynolds, Taika Waititi and Joe Keery. It follows a bank teller, Guy (Ryan Reynolds), who becomes self-aware as a non-playable character within an online game called  ‘Free City,’ and uses his newfound control to become a hero alongside in-game player Molotov Girl (Jodie Comer) in what is now his world. Rotten Tomatoes adorned it with an 80% positive rating, while Metacritic gave it a 62% positive rating. When it comes to audience scores, 91% of Google users who voted gave it a thumbs-up. One Twitter user also claimed that “Free Guy is white people’s Black Panther.’

Outwardly, the film seems like your average cringe-inducing comedy-action film (such as most films featuring Dwayne Johnson). Its official cover is littered with explosions, juxtaposed with the gleeful face of the main character. Although it keeps that cheesiness throughout the movie, it also featured some fitting, serious aspects. For example, as Guy gains control of his actions, he realizes that his life has been depressive and monotonous.

Though some of the comedy made those around me in the theater exchange pained looks, I have to admit I laughed a ton. It’s safe to say that my opinion on what’s funny or not differs quite greatly from most people’s, however, I’d argue that seeing cameos from YouTubers such as Jacksepticeye, Ninja and Pokimane is so intentionally goofy that many others would laugh as well. In fact, I chuckle a bit every time I think about it. The juxtaposition of Guy’s and Molotov Girl’s personalities also allows for a ton of funny moments, Guy’s naive and positive attitude playing swimmingly into her professionalism and seriousness.

This film’s positive traits may fall short when shown to the wrong audience due to the references, game-based jokes and even setting of the film. Pre-teens or young adults who have not grown up heavily involved in video game culture might not understand many references that allow for that cameo-induced “wow, I know where that’s from!” moments. As Kinda Funny Gamescast’s Greg Miller said in a podcast about Free Guy, “We all grew up with these passions that now that we’re the adults, we’re making the things and doing it right.”

A great example is how the film features items from games such as Portal and Half-Life 2, which were both absolute hits when they came out about two decades ago. Though my friend and I were losing it during the part where Guy uses the Gravity Gun, I’d say the average person hasn’t heard of it. Luckily, many references were actually from well-known series, such as Star Wars and Fortnite. But it is a video game movie! In fact, the movie does very well with understanding how video games work and applying that knowledge. I was worried the movie would poorly represent video games, reminding myself of the horror that is Pixels, but the mechanics of the plot, such as the Grand Theft Auto Online-esque world shown by leveling systems and set events that occur each time shows the crew certainly did their research.

Unfortunately, the film’s writing has quite a few kinks. The main villain Antwan, the head of the company Soonami which created “Free City,” was downright atrociously written! A good villain needs actual redeeming qualities to be great. Think of any villain famous for being great, and I’m sure you can count at least three positive traits. Well, with Antwan (Taika Waititi), he’s just the generic greedy businessman that’s probably there to make an implied joke about capitalist materialism (if you’ve seen Doctor Who’s “Arachnids in the U.K.,” you’ll know exactly what I’m talking about). Part of me is sad about it, because Waititi is talented, or as a director at least, winning a couple Oscars for his film Jojo Rabbit. His acting didn’t really sit well with me though. To be fair, I feel much of this was because he had nothing to work with — his dialogue was horrible. I’m sure most of you have had that teacher who attempts to weasel their way into the student body through ‘relatable’ dialogue, improperly using words such as ‘bro’ or other slang. Well, Antwan is the absolute embodiment of that with his nauseating one-liners that feel straight out of Riverdale. Sorry Free Guy, you could have done much better.

I was also not at all invested in the romance subplot. It felt unnecessary, and the subplot was dry. But maybe they add an entertaining aspect for your average teenage girl who spends her nights watching garbage Netflix originals. It’s something for a fraction of non-video game fans, I guess. The romance gave way to a very noticeable plothole as well, as the first half of the movie established that there is no kissing button in Free City, but an in-game player kisses someone else not too long after. Now, if there weren’t any romance, this plothole wouldn’t have been here, just saying!

From a technical perspective, the visuals were certainly pleasing to look at. Though the combination of bright, electronic colors and brown buildings when the video game world is revealed was a tad nauseating, it’s not dissimilar to actual games. As someone who enjoys sound, the audio was well mastered, especially one of the last fight scenes. Everything sounded awesome, almost like watching a superhero movie as a third grader. Not much was super striking about the editing, however.

If you’re someone with a fairly surrealist sense of humor and are integrated into video game culture, Free Guy will most likely be a fun watch for you. And even if you aren’t in that demographic, the comedy hits for anyone in the mood for some laughs during movie night. It may not be a movie that warrants a second watch, or has outstanding characters, but it’s absolutely one of the best video game movies we’ve ever had.