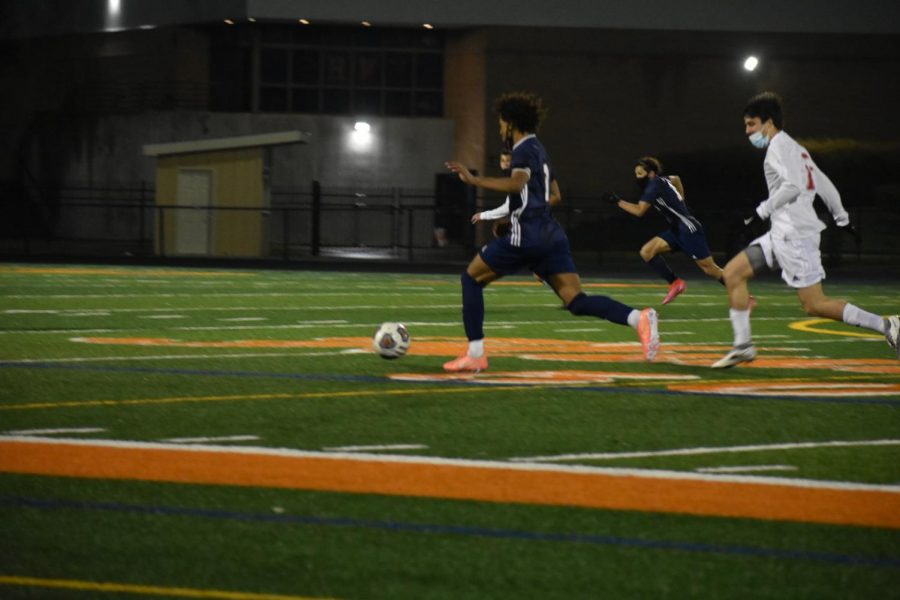 The Naperville North varsity boys soccer team was deadlocked in a battle with crosstown rivals Naperville Central on Tuesday night when, with 35 seconds remaining, sophomore Alex Barger netted a free kick from 40 yards out.

The Huskies battled through a tough game and even tougher conditions to pull out a win. Most of the game was marked with heavy rain and even some hail, making for slick conditions on the turf. But when it came down to the end, the Huskies delivered. Head Coach Jim Konrad was proud of the team for pulling out the win against a tough Central team.

“At the end of the day sports sometimes come down to special players, and Alex was special at the right time today,” Konrad said.

Going into the game Konrad advised the boys on dealing with the pressure of playing for such a historic program, encouraging them to embrace what comes with playing for a four time state winning team.

“We needed to put the two losses behind us, embrace expectations and be the best versions of ourselves,” said Konrad.

Sophomore Alex Barger has been dominant for the Huskies during his two year career as a starter and this game was no different. The forward put continuous pressure on Central’s back line throughout the whole game and was able to capitalize on a late foul. Barger scored his seventh goal of the season, ending the stalemate against the Redhawks.

“I looked over to Goletz and he gave me a little hint to hit it and luckily I was able to put it on target and it was able to fall through,” Barger said.

An important part of the Huskies victory was a solid back line. Led by senior captains Spencer Gaccione and Josh Kaufman, the back line was successful in securing a shutout against a strong Central offense. Going forward, Gaccione stresses the importance of finishing chances and having better communication.

“We want to work on our organization because if we stay compact that allows for our midfield to push the ball up a lot more and not put as much pressure on our back line,” said Gaccione.

After the two previous losses, the Huskies were happy to bounce back with this win. The game  marked a special milestone, Coach Konrad’s 300th win with the program. This win also held significance for the seniors, as it was the last crosstown game of their high school careers. Junior midfielder Jacob Ryu said the team worked hard in practice to prepare for this game, hoping to pull out a result, especially for the team’s seniors.

“We’ve been looking forward to this game the whole season, seniors are leaving so it’s their last crosstown game which meant a lot to us,” Ryu said.

Ryu, along with junior captain Tyson Amoo-Mensah, who was a part of the 2018 state championship team as a freshman, and junior Cameron Radeke make up a strong midfield.  This trio has been important in several Huskie victories, especially a recent win against defending Class AA state champions Benet Academy.

The Huskies are looking forward to improving their connection on and off the field, and continuing to work harder than their opponents in future games. Senior goalie Pablo Jara came up with some key saves throughout the game to secure the shutout and acknowledged the hard work the team put into the matchup.

“We were working for each other, we have definitely had a struggle the last couple of weeks, but this week we knew it was about the program, not ourselves; and we came out here and worked harder than them,” Jara said.

The Huskies will continue their season at home on Thursday, March 25 against the Marmion Academy Cadets. The game is set to begin at 4:30 P.M.