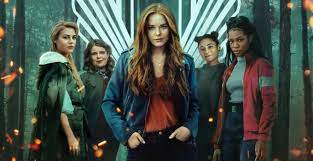 When I first heard that one of my favorite childhood shows, Winx Club, was getting a young adult reboot, my emotions were mixed. On one hand, I was excited to see my favorite characters going on new adventures and tackling more mature conflicts. On the other, I was afraid that the show would completely ruin the original. Upon finishing all six episodes of the first season, my fears were affirmed.

Winx Club follows the adventures of Bloom, a 16 year-old girl from Earth who discovers she has magical powers. While attending the Alfea College for Fairies, she meets her new roommates, who form a group called the Winx Club. Fate: The Winx Saga still follows Bloom and the other fairies of the “Winx Club” as they navigate through Alfea College. Now, they are also preparing to fight the monsters that threaten them.

Reviews range from mediocre to poor. Rotten Tomatoes gave the series a score of 35% and IMDb gave it a 6.9/10. One review from Variety said the show felt like it “took “Harry Potter,” put it through a “Pretty Little Liars” filter and multiplied it all by “The Hunger Games.””

I absolutely detested this show. It deviated from the original series, made the characters unlikeable and included cringe-worthy lines. Fate: The Winx Saga also did not cast actresses of color to play minority characters and glorified underage drug and alcohol use.

Fate: The Winx Saga deviates from the original cartoon in the worst ways possible. The characters Flora and Tecna (two of Bloom’s roommates and members of the original six protagonists), and Brandon and Timmy (two male supporting characters) were completely excluded from the reboot. Instead, we get Terra — Flora’s cousin. Sky and Riven (I’m sorry, Riv), the other two male supporting characters, though present, were wildly different from their cartoon counterparts. While Winx Club’s Riven is angsty but likeable and Sky is kind and loyal, Fate: The Winx Saga’s Riv is a quintessential drug addict bad boy who vapes in every single scene and Sky spends way too much time staring into the sunset to mull over his daddy issues.

The other characters weren’t anything special, either. The Variety review also said that the show felt like “watching a tortured Mary Sue fan fiction come to life” — a walking fanfiction trope in which the main character is completely perfect and has abilities like no one else. Bloom was uniquely powerful and special in the original cartoon as well, but her uniqueness was not forced into every scene. In Winx Club, she was a likeable character, someone you were rooting for as she and her friends got into all their antics. This Bloom, with her standoffish attitude and quotes like “I don’t need you to mansplain it for me” (when Sky was just trying to help her, someone who was visibly lost, get around on her first day at a new school) made her extremely unpleasant to watch. Next, we have Stella, the princess of Solaria. In the original cartoon, Stella is fabulous, classy, kind and sassy. Most importantly, she and Bloom are the best of friends. In the reboot, everything that made Stella such a complex and lovable character was stripped away and she was reduced to a stereotypical mean girl. Much of Stella’s arc in Fate: The Winx Saga is focused on her relationship with Sky, whom she was dating a year prior to Bloom’s arrival at Alfea. She squabbles with Bloom more than they work together, completely ruining the friendship dynamic built up over eight seasons of the original cartoon. Aisha in Winx Club is a princess and a true-blue friend to the other fairies. She is opinionated and pragmatic, always offering helpful advice and being there for her friends whenever they needed her. In Fate: The Winx Saga, she is still opinionated and helpful, but her advice is oftentimes unwarranted and she ends up going against the rest of her friends multiple times.

Musa is a music fairy in the original. In the reboot, she is a mind fairy — an empath that can physically experience what others feel. In my opinion, Musa is the most interesting character in Fate: The Winx Saga because her arc is the most emotionally complex. However, she embodies the “not like other girls” trope with her aloof attitude and constant need to have headphones on to detach herself from the world. Terra, the cousin of the fairy Flora, is the most annoying character out of all of them. She is saccharinely nice to everyone, sensitive to a fault and cannot stop talking, which made me dislike her as the show went on. Overall, each character’s attitude and relationship with others destroyed the close-knit friendship that was one of my favorite things about the original cartoon. At the end of the day, if there’s no friendship between the six fairies, there’s no Winx Club.

Even though I disliked the changes made to the characters, other changes weren’t as bad. I didn’t mind the plot change, for one. The addition of the Burned Ones (monsters terrorizing the kingdom) added a darker tone to the series and gave the characters a sense of urgency that was missing from the original cartoon. However, the execution left much to be desired. There were too many plot twists happening too soon and I was left confused multiple times during the show.

Writing is one of the most important things that I look for in a show, and for me, this show did not meet that mark. Lines were awkward and filled with ill-placed pop culture references. An example of this is a scene where Bloom and Aisha were talking about their Hogwarts Houses in a clear attempt at trying to make the characters “relatable.” Instead, it was just uncomfortable to watch. Another instance is when Terra says “I know, shocker. Earth fairy called Terra likes plants,” which made the exposition and character building too obvious to me.

One of the major issues with Fate: The Winx Saga is how it incorrectly cast minority characters. In Winx Club, Flora is Latina and Musa is Asian. In Fate: The Winx Saga, the actresses who play Musa and Flora are not Asian and Latina, respectively, leaving Aisha as the only person of color (POC) in the entire show. This is problematic for many reasons. For one, it seems to reduce Aisha’s existence to the token POC character the creators decided to keep in for diversity. Second, it sends a message to POC viewers that they do not deserve to be represented in mainstream media. Representation is important for kids and teens — it is amazing to see people from your same ethnicity, race or religion on the big screen. However, Fate: The Winx Saga took this away from both new viewers and fans of the original cartoon.

Lastly, Fate: The Winx Saga glorified drug and alcohol use. There are many scenes where characters consume drugs and alcohol to “fit in.” This theme, echoed in many teen dramas, tells teenage viewers that if they want to fit in and be cool, they must consume drugs and drink while underage.

In short, Fate: The Winx Saga is the worst show I have seen in a while. If you would like to keep hold of your brain cells, steer clear of watching. This show made me lose at least half of mine.