Opinion: The news is better than you think, and that’s important 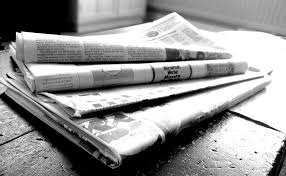 The news is bad. We all know it. It’s like one of the “universal truths” — coffee is always more expensive than you think it should be, it will never rain if you bring an umbrella and good news is a myth. That’s been especially true this past year, when it sometimes seemed like every day brought a new crisis.

But here’s the problem: universal truth or not, the news is not always bad, and we all need to do a better job of realizing it.

It sounds silly to say — some hyped-up version of “appreciate the good things in your life!” that is frequently said but rarely means much. What I mean is a little more specific and a lot more actionable. As a whole, we are biased about the news in a way that goes far beyond politics, and ends up affecting our mental health and outlook in unnecessarily negative ways.It’s time to change.

Let’s take a look at the news. There are, right now, some huge positives: worldwide, we have several working vaccines for the coronavirus, distribution is speeding up as governments and companies work to solve problems, and even treatment is better after more than a year of experience. Most importantly, deaths and severe cases are down. These are real improvements making an active difference in most of our lives and will continue to do so over the next several months.

But when the news media focuses less on the dropping transmission rates and deaths, and more on, for example, slow vaccine rollouts and wasted time slots, it’s easy to feel like things are just as bad as they were a month or two ago. And even when the media outlets do manage to cover the good and bad in a fair proportion, they can’t stop the internal bias we already have to focus on the bad.

Bad news feels right. We feel realistic when we look at how bad things are, a mindset that actually makes perfect sense: we have to recognize problems in order solve them, and we simply don’t need to pay attention to things that are already working. In a wider context, this is called negativity bias, our tendency to weigh bad things as more important. It is even theorized that at one point, it was actually an evolutionary necessity. But now, with the extreme information access the internet grants us and the speed of the 24-hour news cycle, it’s mostly just overwhelming. As much as our primitive brains might want us to believe it, constant pessimism is not a productive worldview, in any sense or on any scale.

Burnout from bad news is a real thing with real effects. Often contributing to or occurring alongside broader mental health issues, “headline stress disorder” is a common name (although not an official diagnosis) for exactly what it sounds like: intense worry about the future, feeling constantly out of control due to issues way beyond personal scale and other stresses caused by constant exposure to grim news stories. When we’re bombarded with it constantly over long periods of time, it can even contribute to physical health problems, especially those related to stress.

So why are we making it worse for ourselves? There are solutions to the problem: health experts recommend a variety of strategies for dealing with this, including some of the obvious ones, like taking a break from social media. But another common tip is figuring out how to intentionally balance the kinds of news you get, by looking in places such as local news outlets for more upbeat, personal stories as a counter to heavy national news. Similarly, these experts recommend trying to put the bad in perspective. This is kind of like the example I used earlier of the coronavirus, but in reverse — when a news story reports a negative, make a conscious effort to either see the good side of the story or think of something else positive as a reminder that it’s not all doom and gloom. Overall, our main defense against our bad news bias is that conscious effort — making the choice to look past our instinctive grasping at bad news to get the fuller, less depressing picture.

This is not to say that we should ignore all problems and negativity. In the long run, that’s just as harmful as ignoring the good, if not more so, and we should be careful not to overcompensate. Instead, we should be looking for a reasonable balance of the two, so that we can stay realistic and happy.

The good news is that right now is actually a great time to do that reevaluation. As discussed earlier, the coronavirus news actually is getting better, so we have something concrete to look at when considering what news we react to and what news is actually reported on. It’s not just trying to force ourselves to see the bright side of a completely grim situation, there actually is a bright side to see. Second, Donald Trump is no longer president. This is not a political statement. It is one that acknowledges his almost single-handed contribution to speeding up the news cycle with his constantly provocative Twitter use and unprecedented behavior. In the weeks since he left office, and particularly since his second impeachment trial ended, the news has already been somewhat calmer, and certainly more able to focus on stories that don’t have to do with a single person. This gives us all an opportunity to step back and think without immediately worrying we’ll miss a crucial tweet.

These two things aren’t a cure-all for everything else going on in the world, and they’re not going to immediately fix the way we consume and value news, either. But together, they do make now a surprisingly good time for us to do that for ourselves. It’s an opportunity to pull back and consider our bias towards bad news, and what we can do to combat it. When we ignore the good news staring us in the face to obsess over the bad, all we end up doing is making ourselves miserable without ever really accomplishing anything. We have the choice, though, to change that. It may not always be as easy as it sounds, but we have the choice to let ourselves be happy about good news, and to focus on it just as much as the bad. And that’s a choice that I, for one, want to make.