Opinion: On the successor of Ruth Bader Ginsburg 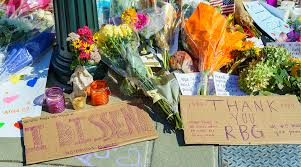 University of Oregon School of Law

The death of Supreme Court Justice Ruth Bader Ginsburg shook the stage of American politics this week. Both as a staunch advocate for women’s rights in the legal system and as a cultural icon, Ginsburg’s 27-year stint as a liberal-leaning justice has had a resounding impact on American society and politics.

Now, we are left facing the reality of what the court will look like in her absence. Before her death, the Supreme Court was made up of four conservative justices, four liberals, and Chief Justice John Roberts, who is by trade a conservative, but has recently taken a more moderate stance, occasionally siding with the liberal judges. This precarious balance in the court is now threatened. With the death of Ginsburg, President Donald Trump could appoint a justice (and from the list he has made public, a conservative one) in her place before the election on Nov. 3, securing a conservative majority in the court.

In respect to the precedent that’s been set, the nomination process for Ginsburg’s successor should wait until after the election, allowing the people to have a say in the next nominee who could impact the Supreme Court for decades.

In an ideal world, partisan politics would not play a role in Supreme Court nominations. The justices themselves are supposed to merely interpret the Constitution and other laws without bias or loyalty to a party. But we don’t live in an ideal world. For years, both the Democrats and the Republicans have politicized the nomination of Justices, and Ginsburg’s successor is proving to be no different. Arguments on both sides of the aisle have very little to do with preserving her legacy, but that shouldn’t take away from the importance of this decision; whoever is allowed to nominate the next justice can potentially change the tide of the Supreme Court for decades. With a Republican president in office (who will nominate the successor) and a Republican majority in the Senate (the only body who needs to approve the nomination), it seems a conservative justice is destined to fill the vacancy, but there are a few factors that could change who makes the nomination.

To understand all of the fuss around Ginsburg’s replacement nomination, we must look back to the precedent set by the attempted nomination of Merrick Garland. When late Supreme Court Justice Antonin Scalia died in Feb. 2016, then president Barack Obama attempted to fill the vacant spot on the court with Garland, a moderate who had been considered for the position for some time. However, Republican Senate Majority Leader Mitch McConnell stated that any attempted nomination by the current president would not be considered by the Senate. Instead, the seat should be filled by the next president, under the premise of allowing the American people to have a say in the nominee.

It is important to note also that with the passing of Scalia, the Supreme Court had to operate with only eight members for nine months before the next election and 14 months before the appointment. In regard to Ginsburg’s replacement, however, the election is less than two months away.

Given how much the American government — especially the court system — relies on precedent in decision-making, it seems natural that the same procedure should be followed. For McConnell to allow the Senate to approve the president’s nomination before the election would be hypocritical and in direct opposition to the ardent opinions he professed only a few years ago. Precedent and tradition keep the engine of democracy running smoothly. Each time someone chips away at those boundaries, we lose a bit of common good in favor of self interest.

Even though threats of hypocrisy are unlikely to sway this decision, the exposure of the ugly face of American politics certainly should. McConnell risks undermining the legitimacy of the Supreme Court; this decision proves that party politics can impact decisions that are made in what is supposed to be the nation’s most unbiased branch of government. Without legitimacy, the Supreme Court is an empty vessel that is incapable of issuing the proper checks on executive and legislative power that it was created to make.

Most importantly in the argument over Ginsburg’s successor, her own opinion should be taken into consideration. In a statement before her death, Ginsburg said her “most fervent wish” was to have her seat in the court be filled by the next president to be sworn in. Anticipating the discourse we now see, Ginsburg asserted the fact that she wanted to give the voters the say in her successor. The people should decide the fate of the balance of the Supreme Court.