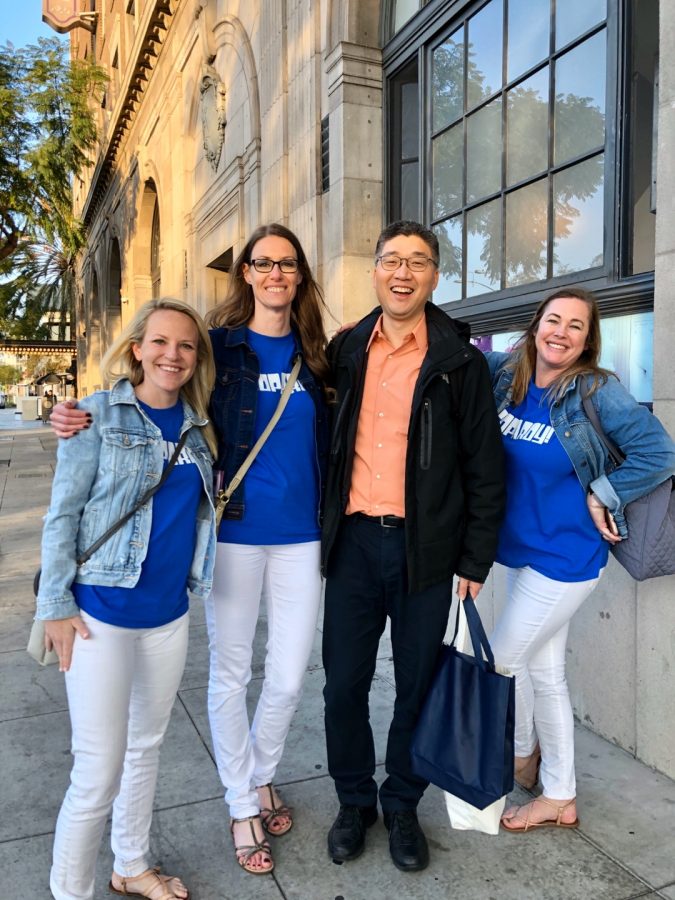 Naperville North math teacher Jong Ho Kim searched up the phone number of each unknown call from California in the months following his “Jeopardy!” tryout. Most were typical spam calls. But come late January, in the middle of seventh period honors precalculus, he got the call.

“After the tryout [in August], you just wait and wait and wait. At first, every day, I was like, ‘Am I going to get a call today?’ But then, after a while, it was just like, ‘probably not today,’ until that day in January,” Kim said.

One Google search later, the name “Sony Studios” popped up on his computer. As the class continued to work on their math, Mr. Kim did a little fist pump in the air. He was going to “Jeopardy!”

“Jeopardy!” has a 46-day taping schedule, with new episodes airing on weekday evenings, each featuring three contestants. The trivia game show has been around for almost 56 years, originally airing in 1964. As of recently, Naperville North has been well-represented on “Jeopardy!:” Along with Mr. Kim’s 2020 episode(s), NNHS graduate James Holzhauer competed in 2019 and had a 32-game winning streak, taking home $2.46 million.

Kim made the decision to try out for “Jeopardy!” after being repeatedly encouraged to do so by other NNHS teachers who had seen his trivia talent in person.

“Mr. Becvar would constantly bug me to try out for ‘Jeopardy!’,” Kim said. “And I was already dabbling in trivia, playing HQ trivia on my phone, so I figured I might as well try so I could get Mr. Becvar off my back.”

“Mr. Kim is probably the smartest person that I know. We do trivia in the math office and he always knows all the answers. When I played Trivia Crack, he would be next to me so I’d ask him a question and he’d always know the answer instantly,” Becvar said.

Friday lunch trivia in the math office convinced other teachers, including algebra teacher Marissa Early, that Mr. Kim was a great fit for “Jeopardy!” as well.

“In trivia, he tries to let us answer, but he knows basically everything. He engages us, but usually when we can’t come up with an answer, we just ask him, and he always knows,” Early said.

After learning he was going to be on the show, Kim started the complicated process of studying the variety of topics that appear on “Jeopardy!,” which span from science to pop culture.

“Once I got the call, it took me about a week to get into gear because I like to procrastinate,” Kim said. “But the first thing I did was make a long list of all the episodes to watch and I started talking to a guy who had been on “Jeopardy!” before through an online message board. I tried to watch the episodes and simulate playing the game as much as possible.”

Both the amount and caliber of Kim’s preparations came as somewhat of a surprise to Mrs. Early, who was impressed with his dedication.

“He prepared so much. He was preparing every day after he made it,” Early said. “I don’t even know how you study for something like that, but he was doing all these things to prepare that I would not have even thought of.”

A large part of Mr. Kim’s preparations were for a different reason than just knowing the facts, however.

“More than anything, my preparation was for confidence. I needed to feel like I wouldn’t embarrass myself,” Kim said.

As Kim prepared for the competition, three teachers from the math department—Mrs. Early, Mrs. John and Mrs. Christiansen—prepared to accompany him to California.

Before the show was filmed, the four teachers spent a day sightseeing in California.

“My sister lives in Culver City, so I go down there a lot and have already seen all the sights. The three other teachers hadn’t seen much there though, so we took full advantage of our free day in the city and crammed in a lot of things,” Kim said.

The sightseeing continued into the two days of filming for the other teachers, who learned a lot about the production of “Jeopardy!” while Mr. Kim was backstage.

“Being in the studio and watching how TV production works was very cool. Seeing Alex Trebek was also cool, and it was interesting to see how quickly they turned around the show—it was just one round and then the next,” said Early.

Going into the filming of the show, no one had any definite expectations for how Mr. Kim’s performance would play out.

“[Mr. Kim] comes off quiet, but he has a goofy side to him. I didn’t really know what to expect at first in the context of “Jeopardy!,” but he definitely showed that goofy side,” Early said.

Mr. Kim did not know exactly what to expect either, but he thought his performance on the show would fall into one of two extremes.

“I was pretty sure that I was either going to do really well, or I was going to look like a complete idiot. I felt like I could do it, but there was that one part of me that was saying, ‘What if it’s the complete opposite of what you’re expecting and you choke under pressure?’” Kim said.

On the day that he was filming his episode, Mr. Kim’s nerves subsided once he stepped onto the stage.

“I felt a lot of jitters on and off throughout the morning waiting to tape the show, but being on stage was pretty easy because I can focus on one thing pretty well. I was trying to remember all the positive memories of scholastic bowl in high school,” said Kim.

After filming the show however, the nerves came rushing back.

“Afterward, I felt this immediate pain in my stomach like I had five ulcers; my body was a nervous wreck. Once the cameras went off, I was like, ‘I think I’m going to die,’” Kim said.

Mr. Kim is not allowed to disclose the results of the competition, but his first “Jeopardy!” episode will air on May 29.

“Just being there to support Mr. Kim was cool, he’s like the smartest person ever—the whole thing was awesome,” Early said.