“The Diary of Anne Frank” comes to Naperville North theatre 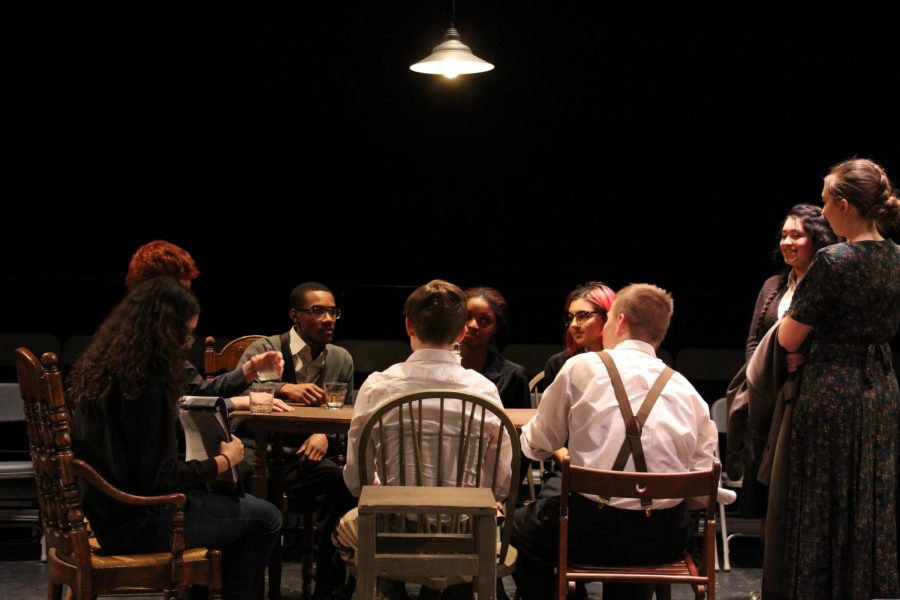 Naperville North’s theater department will be performing “The Diary of Anne Frank” this weekend, retelling the memoir of the beloved Jewish girl forced into hiding during the Nazi invasion of the Netherlands.

Anne Frank’s (Mia Latigo) diary is a personal written account capturing the two years she spent in the Secret Annex with her parents, her sister and four other tenants. Published in 1947 by her father, Otto Frank (Joshua Smith) Anne’s diary continues to resonate with the modern audience of today and provide an in-depth, personal account of what it was like to live in hiding. Director Andrew Simon, who is Jewish himself, hopes that Anne’s story will resonate with audience members now more than ever.

The production of “The Diary of Anne Frank” poses a unique challenge to the NNHS theater department and cast: the stage has been turned into a black box theater. Audience members will be sitting onstage, surrounding the cast at all sides for the duration of the play. In order to convey the struggle of Anne’s life in the annex, the main cast also remains onstage for the show’s entirety. Costume changes will occur in front of the audience, and without access to microphones, the cast will have to project their voices to be heard.

“For the actors, it’s an incredible challenge,” Simon said. “They’ll be onstage the entire time: two hours straight. We wanted this [setup] from the beginning. It’s a really powerful piece.”

The cast of “The Diary of Anne Frank” took a trip to the Illinois Holocaust and Education Center in Skokie earlier this week in order to get a deeper understanding behind the history of the Jews’ prosecution. This week marks the 75th year since Auschwitz’s liberation, making it a special time to honor Anne’s story onstage. Senior Josh Smith hopes that Anne’s legacy will continue to leave its impact and that the audience will leave the play with a greater understanding of her trauma.

“This is definitely a play that we felt like we had to do. It is not the typical American story where, at the end, the hero will overcome [the challenges]. It shows that sometimes there are losses, there are casualties,” Smith said. “It really brings out how real the Holocaust was. You never want somebody in the future to come out and say that it didn’t happen. It is important that we remember that.”

Directed by Andrew Simon and co-directed by students Rachel Leibforth and Sam Rosenberg, the play will be showing on Friday and Saturday at 7 p.m. as well as Sunday at 2 p.m. Due to the black box nature of the play, seating is extremely limited for all performances. Tickets purchased at doors will be $6 and $12 for students and parents, respectively. Tickets can also be ordered beforehand at nnhsarts.com for $5 and $10.