What a Fool I’ve Been: Last Christmas whams the audience with false promises 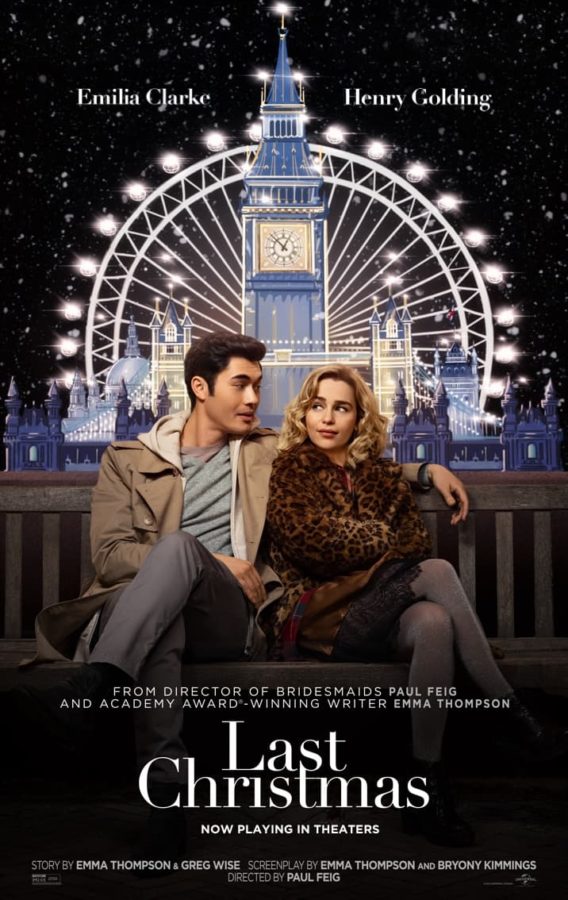 Once in a lifetime the perfect Christmas rom-com spins the viewer around on shaky ice skates and kisses them under the mistletoe. Each cheesy joke or ridiculous twist melts on the tongue like freshly baked sugar cookies. The film feels like the holidays, wrapped in merriment, love and a heartfelt final message.

Drunk, homeless, sleepless and alone, Kate isn’t exactly in the Christmas spirit. She’s running out of friends with couches and patience, and she’s nowhere closer to landing her dream role on the West End (the British form of Broadway). However, when a bicycling stranger randomly crosses Kate’s path, his bizarre personality might be enough to revive the selflessness inside of her.

From meet-cutes to family reunions, Last Christmas has everything to make the perfect holiday film, but the whole picture just seems tilted like an off-kilter Christmas tree topper. Director Paul Feig fills unnecessary dead air with awkward, embarrassing and inappropriate jokes, reminiscent of his work on The Office and the all-female Ghostbusters remake. Fiery frontrunners Emilia Clarke and Henry Golding struggle to find a romantic connection between their characters to drive the love angle. So if it isn’t particularly comedic or romantic, what exactly is Last Christmas?

Every character seems to be a “fresh take”: not adhering to typical tropes and archetypes. Films should try to spice up overdone stereotypes, but each of the characters are simply too much in this film. They aren’t believable. No person bicycles packages around a city, looks twenty feet into the air as he walks, leaves his phone locked in a cabinet at home and volunteers at a homeless shelter all at once. Everyday people are not so individual and quirky. Maybe one character could lead a wacky life, but every single person is oddly unique.

The unrelatability could’ve been forgiven, except the comedy was riddled with second-hand embarrassment. Surprisingly enough, audiences don’t enjoy watching a self-absorbed hedonist fail miserably for half of a film. The laughter in the crowd decrescendoed fast.

Without being too specific, the ending isn’t satisfying. The plot comes together messily and without further explanation, begging the audience to accept their reality at face value. In the end, the creators tried to produce a reflective and thought-provoking film, but the ending distracts the goal entirely, causing more confusion than anything. Although I will say the storyline sets itself up adequately, Last Christmas hesitates on the quickdraw, creating uncomfortable scenes and distracting discontinuity that becomes weirder with more thought.

The message is also a poorly veiled social criticism. Throughout the film, dialogue urges the audience to leave their phones locked and at home, promising freedom and relief. It seems as though half of Golding’s lines include the words, “Look up.” The incessant reminders annoy the attentive viewer, doing more damage to the final themes than good. The story also pushes a very liberal viewpoint on controversial political topics, which isn’t by itself a criticism, but doesn’t seem to fit into the Christmas vibe. The inclusivity argued on multiple occasions during the film might’ve worked better with a more bipartisan acceptance rather than villainizing conservatism. Christmas isn’t for one belief, nationality, race or sexuality, and the film misses the mark at points.

Concessively, the movie isn’t horrible. A few tender moments capture heartbeats, and Kate’s character arc successfully reminds the audience of the true gift of Christmas: helping the less fortunate. As a whole, Last Christmas isn’t everything the hundreds of ads portrayed, but the film colors between the lines enough to entertain.

Littered with tame sexual references, Last Christmas won’t be on the family must-see list, but for anyone looking for 102 minutes of George Michael music, lackadaisical humor and a film vomiting Christmas decorations onto every corner of the screen, this film is for you.