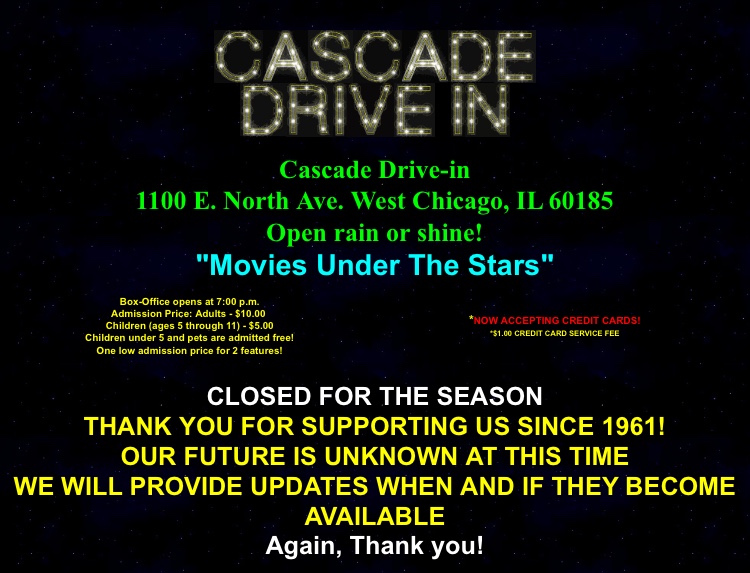 In an ever-changing world of technology and innovation, drive-in movies offer some American nostalgia that can be hard to come by. As one of the few remaining Chicagoland area theaters, the Cascade Drive-In has been a summertime staple since 1961. This year, popcorn is being served with a hard sprinkling of reality 一 there may not be another season in store for the theater.

The property owners, the Kuhn family, have allowed theater owner Jeff Kohlberg to operate the drive-in thus far, but the lease on the land expired on Dec. 31, leaving the theater’s future up in the air.

The Kuhn family has the land up for sale, and Kohlberg said the family hasn’t responded to his questions about the future of his drive-in. He must know soon, as the theater usually opens during the spring.

“We must start [the process of] opening in March or risk losing part or all of the season,” Kohlberg said in an email interview.

Kohlberg continues to pay expenses on property to ensure that there is no damage to the equipment, but in March he will remove the equipment if there is no talk of a solution with the Kuhn family.

“The community must let the city know [of] their support and the city must convey to the landowner [Kuhn] the displeasure that would incur if business is closed with no sale or development in [the] immediate future, putting at risk proposed development by the landowner,” Kohlberg said.

The news spread quickly on social media, with a recent post on the drive-in’s Facebook page getting over 700 comments and 2,000 shares in one day. Most fans commented on the joy the theater has brought them over the years. However, there were a few who took the opposing viewpoint, explaining that the theater will likely close given the amount of money that would be necessary to obtain the land or strike a deal. On the post, the admin from Cascade Drive-In stated that they understand the owners’ right to sell and develop his property, and they appreciate the owners’ cooperation in the past.

“What we want to point out is the theater [potentially] being closed without a sale, which is the fact, and just remaining closed without any development or sale,” the post said. “This is what’s happening. All people will see is a vacated business. If the property was sold and was going to be developed so be it but that’s not the case. This makes no sense.”

After viewing the post, moviegoer Chris Novielli made a petition to keep the theater alive. It gained over 4,000 signatures in one day. Supporter Kelli Kramer of Woodridge, IL, explained how the theater was unique for her in the “reasons for signing” section of the petition.

“An evening at the Cascade Drive-In is an experience that is so different than going to see [a] movie in a theater. Most nights when we have gone it has been packed. There is still a need for this in the community,” Kramer wrote.

The theater has transcended generations for some families, providing parents and their children with the same experience. Maura Connor, parent to NNHS junior Kaia Connor, said she remembers going to the drive-in as a child on warm nights, getting snacks from the concession stand and going out for ice cream afterwards.

“I think it’s great that my daughter can have a similar experience, especially in this age of technology in which things are immediate and fast-moving. It’s great to be able to slow down for a couple of hours and immerse yourself in the shared experience of a movie,” Connor said.

Adults are not alone in their love for the nostalgic feel of the theater. Many Naperville North students have driven to Aurora for the picture shows, which are offered “rain or shine.”

Junior Kasey Conway explained how the theater is a retro gem in West Chicago’s modern society.

“I went during the summer and I loved how old-fashioned it was. I felt like I lived in the 70s and it was just the thing everyone did. I wish I went more, I really would hate to see it shut down,” Conway said.

Rick Cohen, owner of The Transit Drive-In Theatre in Lockport, NY, met Kohlberg five years ago through the drive-in business. He said that tearing down the drive-in without concrete plans for the property is an unnecessary punishment to the community, and fears that the land will sit there without action if closed. Cohen explained that an end for the season almost definitely means the end for a drive-in in the area 一 forever.