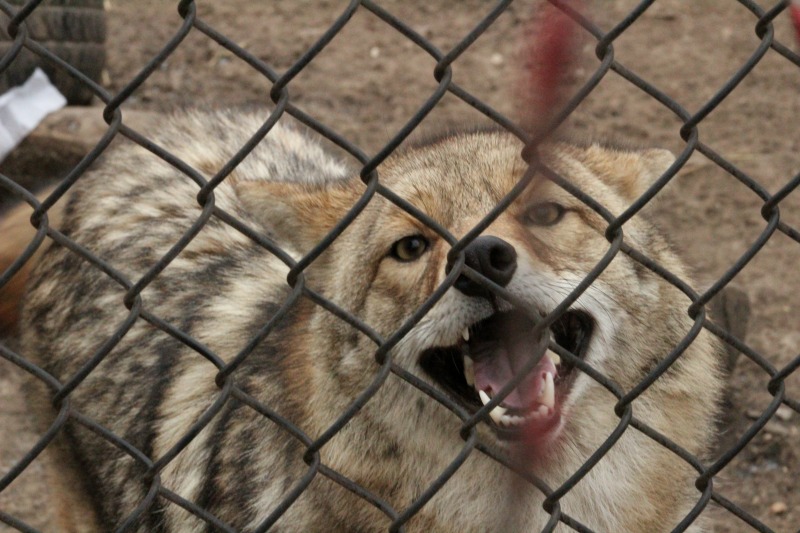 Nicole Woods and her husband Rob opened the back door of their Columbia Estates home to let their Maltese poodle outside. As the dog sniffed around the yard, the couple looked away for just a second. When they returned their gaze to the small dog, Rob got a glimpse of two shadowy figures in the tree line. Before he could react, two coyotes emerged and lunged at their pet. Through frantic screaming and panic, Nicole and her husband managed to scare the wild canines away. They refocused their attention on their injured dog, who was running back to the house in shock.

“She was visibly bleeding, and she had two big teeth marks that were deep in her neck. Her eye was all bloody around it,” said Nicole Woods.

The thought of a beloved dog or cat being hurt by a wild animal is a fear that lurks in every pet owner’s mind. With the increase of coyote sightings in DuPage County and surrounding areas, these dangerous encounters are becoming increasingly familiar. However, the sightings do not directly correlate to an increase in coyote population. According to the Urban Coyote Research Program of Cook County, the coyote population is between 1,500 and 2,000 and has not changed much over the past few years. The frequent sightings may simply be the result of a diminishing habitat for the canines, and an increase in the resources available in residential areas. Especially during the February breeding season, coyotes can be seen both day and night.

Regardless of personal experiences or opinions, one fact remains true: coyotes are here to stay. For all the negative press, the coyotes serve an important function in the wild community. It is essential for the public to become more educated. Understanding issues are the first step to solving them, but fear can be a very powerful force. In this instance, it can cause residents to have false perceptions about their environments, especially when they feel their loved ones are in danger. Willowbrook Wildlife Center naturalist Stephanie Touzalin has had experience rehabilitating injured coyotes and believes that most people have false images of the animals.

“The way the media works is that we always hear about the attacks… people don’t realize that there are peaceful encounters that happen every day,” Touzalin said.

Coyotes are essential to our environment. As one of the few top predators in DuPage County, they help control the large rodent population. Based on a study conducted by Paul Morey, small rodents make up 42% of their diet, followed by fruit at 23%, and occasionally deer (22%) and rabbit (18%). Furthermore, coyotes are adaptive creatures, and often change their behavior to thrive in unique environments and habitats.

As dangerous as wildlife may seem, there have been no reports of coyote attacks on humans in all of DuPage County. In fact, humans can have disastrous effects on the canines’ population. Between 40-70% of deaths for urban coyotes are the result of vehicle collisions, creating a life expectancy of only three years. As Touzalin was working with coyotes, she noticed their behavior with humans was far from aggressive, but much more shy and timid.

“They kind of back away and avoid eye contact,” she said.

In order to prevent coyote encounters, Touzalin recommends keeping an eye on pets and never leaving them unattended outdoors. Furthermore, eliminate any potential food sources, including garbage cans and pet food. As a final tip, she believes a simple clap or shout should frighten the wild animals away.

Coyotes are a natural part of the Naperville wildlife and cannot be eliminated. In order to thrive in our county, wild canines and humans must adapt to living in the presence of one another. Although there may be the occasional danger to the pets of residents like Nicole Woods, the environment would not function properly without coyotes.

“I do have an appreciation for wild animals. I don’t think we should necessarily get rid of them all, but I think that there should be precaution and measures and maybe, even more education,” said Woods.